Professor Nicholas Thomas been Director of MAA since 2006, and is an anthropologist and historian. He visited the Pacific Islands first in 1984 to research his PhD thesis on the Marquesas Islands, later worked in Fiji and New Zealand, as well as in many archives and museum collections in Europe, north America, and the Pacific itself. He has collaborated with artists including painter John Pule and photographer Mark Adams on projects exploring cross-cultural art histories in the Pacific and curated exhibitions for many museums and art galleries in Australia, New Zealand and the United Kingdom . He is currently a member of the Conseil d’orientation scientifique of the Musée du Quai Branly in Paris and the International Advisory Board of the Humboldt-Forum in Berlin.

His books include Entangled Objects (1991), Oceanic Art (1995), Discoveries: the voyages of Captain Cook (2003), and Islanders: the Pacific in the Age of Empire (2010), which was awarded the Wolfson History Prize.

Lucie’s research interests focus on Pacific ethnography, including the history of collecting and collections in the late 19th century and early 20th century, the relationships between private and public collecting and the role of objects in mediating relationships between Pacific Islanders and European visitors. She has previously been a researcher on the Artefacts of Encounter project at MAA, and a collections assistant in anthropology at the Museum.

2012. Becoming ‘Professional’: From the Beasley Collection to the Cranmore Ethnographical Museum. Journal of Museum Ethnography, No 23.

Ali’s research interests are in the history of collecting in Oceania, specifically Micronesia and Australia, and the relevance of these collections to issues such as land rights and climate change. Ali completed an AHRC Collaborative Doctoral Studentship (2009-2013) with King’s College London and the Department of AOA at the British Museum. Her PhD compared two collections of indigenous Australian material culture (Tiwi and Yirandali) housed in the British Museum, focusing on indigenous/settler relations, and relationships to land. She has worked on exhibitions and research projects at the British Museum, the October Gallery and the Inigo Rooms, and lectures at King’s College London and the University of Oxford Institute for Continuing Education.

(2014) What Happens Next? Sustaining Relationships Beyond the Life of a Research Project. Journal of Museum Ethnography. No.27.

(2013) Conversations Around Objects: Displaying the Christison Collection in Canberra and Edinburgh. Journal of Museum Ethnography. No. 26.

Erna’s interest in Pacific collections has foundations in her own heritage and in research undertaken for her PhD thesis. As part of the Pacific Presences team she will continue to pursue the idea that there is much more that collections can tell us about the people who made and used the objects within them by bringing to bear a cross-disciplinary approach that encompasses present-day makers and cultural experts and a close examination of the artefacts themselves. She believes that the most quotidian objects can offer insights into the lives of those people least represented in historical sources, such as women and children. In part, Erna’s interest in the physicality of artefacts and the processes used to make them stems from her own, and continuing, engagement in the visual arts as an artist. 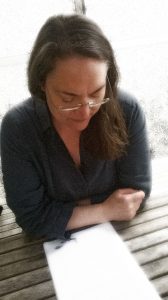 Alana is a conceptual artist, in that, she works from the concept first then finds the right medium through which to explore specific ideas. Her artwork includes performances, events, novel writing, paintings and site-specific interventions. Her wide ranging practice stems from an ongoing concern with colonialism and investigating the way that individuals navigate systems of power. Lately, her work has also addressed ecology and inter-connectedness.

Her research with the Museum began with a post-doctoral project funded by the AHRC on the relationship between the collection, the collector and the collected, explored through exhibitions, events and publications, including ‘The Fork’s Tale, as Narrated by Itself‘ (LemonMelon 2013) and ‘This is Not Art: Activism and Other Not-Art’ (IB Tauris 2013).

More information can be found at www.alanajelinek.com.

A former senior curator and lecturer at the Museum of Archaeology and Anthropology (MAA), University of Cambridge, she has also curated and designed exhibitions at the Tairawhiti Museum in New Zealand. Research interests include Maori weaving (whatu and raranga), artefact-oriented ethnography, cultural and intellectual property, digital taonga, and the ‘ontological turn’ in social anthropology. Her book Museums, Anthropology and Imperial Exchange (2005) was published by Cambridge University Press and she co-edited Thinking Through Things: Theorising Artefacts Ethnographically (Routledge 2007).

Russian–born Dr. Elena Govor now lives in Australia where she completed her doctorate in history at Australia National University in 1996. Her research focuses on cross–cultural contacts between Russians and peoples of the Pacific and Australia which she examines in a range of publications which include ‘Speckled Bodies: Russian Voyagers and Nuku Hivans, 1804’ in Nicholas Thomas et al, Tattoo: bodies, art and exchange in the Pacific and the West (Duke University Press, 2005) and Twelve Days at Nuku Hiva: Russian Encounters and Mutiny in the South Pacific (University Hawaii Press, 2010).

Mark Adams is one of New Zealand’s most distinguished photographers, best known for his work on Samoan tattoos. He will be documenting the work of the project, as well as taking images of objects for publication.

Dr Julie Adams studied at the Sainsbury Research Unit for the Arts of Africa, Oceania and the Americas. Her doctorate ‘Te Kahu Ukauka: The Enduring Maori Cloak’ (2007), examined the significance of Maori cloaks in contemporary Maori art.  She is Curator Oceania at the British Museum and has worked on major research and exhibition projects at National Museums Scotland and the Museum of Archaeology and Anthropology, Cambridge.

Billie is Senior Research Fellow at the University of Auckland Business School (NZ) and was recently appointed Contributing Editor for the Arts of Oceania to Khan Academy (USA). Working at the junction of economics, anthropology and art history, Billie specialises in ethnographic studies and object-centric research. She is especially interested in possibilities for reframing historical interactions and collaborations between Europeans and Polynesians, and their material, artefactual and philosophical legacies for contemporary communities. She is currently co-editing volumes on the eighteenth-century voyage artefacts of Bruni d’Entrecasteaux and Malaspina.

Katharina Wilhelmina Haslwanter is a PhD student from Zurich University. After finishing her Master’s thesis on the history of the Polynesian collection of Carl Cramer and Eduard Graeffe, she lectured in the Ethnography Department and conducted provenance research at the Ethnographic Museum at Zurich University. For her comparative PhD project Dutch New Guinea in flux, she is investigating three collections from the Western New Guinea Highlands in five European Museums. In the past decade, she was involved in curating several exhibitions in Vienna and Zurich, contributing to publications including Drinking Skills (2014), Gesichter eines Museums (2014) and Kosmos (2014).

Philipp Schorch is lecturer at the Department of Social and Cultural Anthropology at Ludwig-Maximilians-University Munich, Germany, and Honorary Fellow at the Alfred Deakin Institute for Citizenship and Globalisation at Deakin University, Australia. Philipp’s research focusses on museums, material culture/history/theory, contemporary art and (post)colonial histories, the Pacific and Europe, and collaborations with Indigenous artists/curators/scholars. He received his PhD from the Victoria University of Wellington, New Zealand, and held fellowships at the Lichtenberg-Kolleg – Institute of Advanced Study, Georg-August-University Göttingen, and at LMU Munich (Marie Curie, European Commission).

The research by this project is funded by the European Research Council under the European Union’s Seventh Framework Programme (FP7/2007-2013) / ERC grant agreement n° [324146]11.