Travelling through time with tapa

Over three weeks in April 2017, Pauline Reynolds, a visiting researcher with Pacific Presences, various museums in order to study tapa made by my foremothers. This began with attending the second day of the Museum Ethnographers Group conference in Glasgow, a fitting way to begin my collaboration with Pacific Presences and contextualise my visit.

The first museum visit was to King’s Museum with Lucie Carreau where a beautiful example of a Pitcairn tiputa (something like a poncho) is held. I’m particularly attached to one of these examples, because we know the name of the maker, it shows signs of wear and tear, and it has become familiar to me, like an old friend. The curator Louise Wilkie had discovered another two cloths – one a tiputa, and another a length of undecorated white tapa, which made the day exceptionally successful. The tiputa at the top of the photo here was made by Dinah Adams, the daughter of Vahineatua and mutineer John Adams

In Glasgow we visited the Centre for Textile Conservation where the research project ‘Situating Pacific Barkcloth Production in Time and Place’ is operating, and viewed examples of Pitcairn tapa from the Kew collections and the conservation techniques used in their care, and spoke extensively with the conservation team including Andy Mills, Frances Lenndard, Misa Tamura and Beth. This was followed by a visit to the Glasgow Museum Resource Centre guided by Ed Johnson and Pat Allan, where we were able to observe a range of different coloured cloths – one dyed a stunning rich yellow dye, another a dirt brown, another cloth was so fine it resembles a loose gauze. 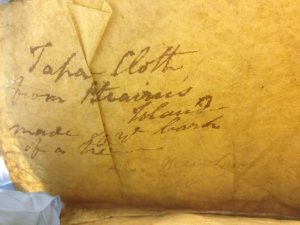 I had met Michaela Appel at the Made in Oceania conference in Cologne in 2013, and she was sure that the Five Continents Museum in Munich had a tiputa similar to the King’s Museum example. Sure enough, when I visited with Erna Lilje, I recognised the unmistakable patterning that is unique to Pitcairn tiputa – it is a fine example. While we were there, Hilke Thode-Arora and Michaela showed us a large range of beautiful Polynesian tapa, part of an extensive and fabulous collection. 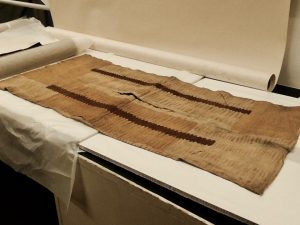 One of the great strengths of participating in Pacific Presences from my point of view is being able to engage in worthwhile and inspiring exchanges with the Pacific Presences team, in particular Lucie and Erna, while observing Pitcairn and Tahitian tapa. At the British Museum’s Blythe House stores, we saw a number of tapa that I had seen before, but observing them with Lucie Carreau, Julie Adams, Jill Hassell, and my daughter, allowed for vigorous discussion around a range of issues: colour, dye, size, technique, use, the effects of conservation … as well as exacting observations – the width of beater grooves used and other techniques. We required two full days at the British Museum stores, and could easily have stayed another, examining the wide range of cloths. 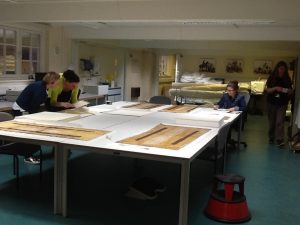 Throughout my research I have found it most helpful to ask myself the following questions when collecting data about tapa and related objects:

What is it, what are its qualities?

Who made it? Who gave it?

When was it gifted or collected?

It is sometimes possible to build a picture of a Pitcairn woman and her relationships by the gifts she gave. Hannah, Dinah’s sister (who made the Aberdeen tiputa in the photo above), wrote to Rear Admiral Lowther who had visited Pitcairn in the 1850s, expressing herself eloquently in both Tahitian (her mother’s language) and English, an important revelation showing that Tahitian was still fluently spoken on the island at that time. This letter, along with another written by Hannah’s daughter Elizabeth Buffett, is located at the Centre for Anthropology in the British Museum. Elizabeth also gifted a finely made cloth to a visitor to Pitcairn in 1850, of which a small section is today at Hastings Museum. 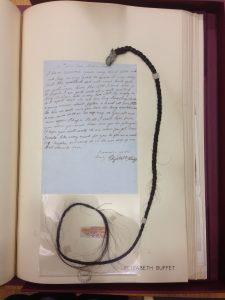 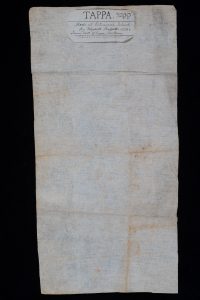 There were a number of surprises in the collections we visited. Newly discovered cloths in various locations could possibly mean that my database of Pitcairn tapa will be forever expanding. Incorporating these items into my expanding documentation has allowed my profiling of the Pitcairn women to expand and fill in gaps I thought would always remain a mystery.

Finally, a visit to Pitt Rivers with Nicholas Crowe and Faye Belsey was impressive, discovering another “new” tapa, observing conservation techniques, and a fine collection of archaeological objects from Pitcairn and around the world, while time in Cambridge allowed me to visit a number of important items at the MAA, give an informal talk about my visit, and learn from the wonderful team of the Pacific Presences Project.

These tapa act as vessels, transporting me back through time, where (if I’m lucky) I might catch the scent of the air at the time of its production, imagine the maker’s mindset, marvel at her skills, and puzzle over her choices. This is a personal journey of discovery and genealogy, but also one that will eventually benefit all descendants of these amazing women. I was struck by the care and attention, and attachment that curatorial teams hold for each of these tapa: which is heart-warming considering the Pitcairn tapa are genealogical markers for my people. I benefited from the robust conversations around tapa during my research trip with all of these curators, and the Pacific Presences team.