← A hīkoi of connections: Māori paddles from East Coast waka taua traded in 1769 Toshio Asaeda at the National Museum of Ethnology in Osaka, Japan →

Posted on November 17, 2017 in Uncategorized

On 16 October 2017, photographer Mark Adams and project PI Nicholas Thomas visited the Etnografiska Museet, Stockholm -an impressive and innovative museum, though one housed in a rather ordinary red building from the 1980s, which gives little initial sense that some collections date back to the renowned eighteenth-century scientific societies and travellers associated with Linnaeus. Their particular interest was in an unusually large barkcloth, thought to have been collected during Cook’s first voyage. In this blog post Nicholas writes about their discoveries. 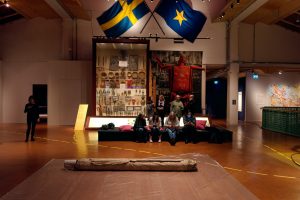 Preparing to unroll the barkcloth. Photograph by Mark Adams.

The barkcloth forms part of an important early collection given by Joseph Banks to Stockholm merchants and naturalists, the Alstromers, published by Stig Ryden in The Banks Collection (1965). Although the collection includes clubs from Tonga which cannot have been collected during the first voyage, Ryden assumed that Banks was the field collector of most of the material and published the textile (1848.1.13) as Tahitian, associating it with a formal welcome soon after the arrival of the Endeavour in April 1769, when Banks wrote of being presented with a large piece of cloth. Until we looked at the bark cloth on Monday – with the help of the really wonderful Stockholm team, who put in a lot of time to make this possible – the cloth had not been examined for many years. 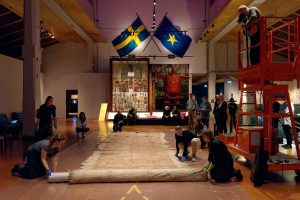 As the piece was unrolled – our excitement mounted – it became apparent that it featured a typically Tongan rubbed design and reddish-brown colouring, and could not be what it had been identified as. In fact the cloth is very similar to an example in the Pitt Rivers, 1886.1.1238, which is part of the collection presented by Johann Reinhold Forster to the University of Oxford, following his return from Cook’s second voyage. That work also includes the same freely marked diagonals and lines along the otherwise plain fringe. 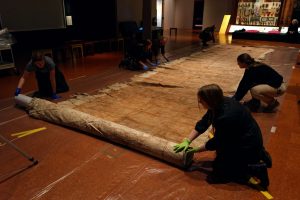 Patterning on the barkcloth. Photograph by Mark Adams.

However, it is not cut from the same example – on the Oxford piece a diagonal and vertical rubbed pattern alternates whereas this features only a diagonal, rubbed from the same board along the full length and in reflection on both sides of the Stockholm piece. (The latter, approximately 14.77 x 2.6 metres, is also about 40 cm wider than the one in Oxford). There are related ngatu in Göttingen, probably also collected by Forster (Oz 576, 577). However the affinities are close enough to imply that the Stockholm example was from the same community of makers; it was no doubt acquired by one of the Forsters or some other participant in Cook’s second voyage, given to Banks and by him to the Alstromers.

This seems to be the largest piece of bark cloth with a Cook voyage provenance which remains extant. This clarification of its provenance may be valuable for those researching early Tongan ngatu. 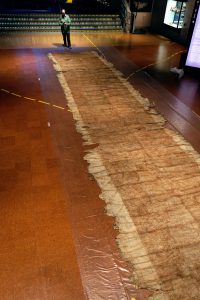 Capturing the length of the impressive barkcloth. Photograph by Mark Adams.

It is however unfortunate, indeed tragic, particularly in the context of a revival of Tahitian interest in barkcloth, that no large Cook voyage example – the gift in its integrity – appears to have been preserved. While there are many textual references to presentation of textiles of this size, the only very large surviving cloth appears to be the one in Cambridge, likely to have been presented 50 years later to the LMS missionary George Bennet; though an eight-metre section thought to have been acquired by James Wilson during the voyage of the Duff which established the London Missionary Society is in Newcastle (thanks to Julia Lum for this information). And special thanks to Anna Fahlen, Aoife O’Brien and Stockholm colleagues for their generosity.