← Traces of the H.M.S Royalist in Vanuatu An early Tongan ngatu tahina in Sweden →

A hīkoi of connections: Māori paddles from East Coast waka taua traded in 1769

Posted on October 2, 2017 in Uncategorized

On the morning of June 8th 2015 a group of Pacific Presences researchers and associates came together to share an unforgettable moment in the South of Germany. The Linden Museum, Stuttgart kindly provided a large group of us from New Zealand, England and Germany access to a couple of very special Maori hoe or ‘paddles’ held in their archives. 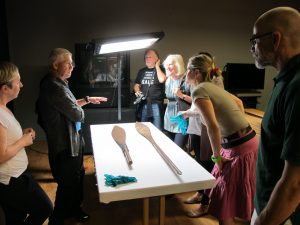 The crosscultural hīkoi of the excellently preserved hoe on the right started some 248 years ago three miles offshore, somewhere between Whareongaonga and Tikiwhata south of Poverty Bay on the East Coast of New Zealand. In this particular case, after a rough start in Poverty Bay, the Crew of the Endeavour having had violent encounters on landfall with local Maori iwi, with subsequent killings. These two paddles presumably originated from the well documented trading incident on the Endeavour on October 12th 1769 just South of Poverty Bay, off the East Coast of New Zealand, when seven waka taua, Maori war canoes with around 50 crew approached the Endeavour. Local historian Mackay[1] describes the trading incident on the first Cook voyage after leaving Poverty Bay in detail:

‘The Endeavour made slow progress to the southwards. At noon, she was held up by a calm three miles off-shore at a point between Whareongaonga and Tikiwhata. Several canoes made their appearance, but stood off about a quarter of a mile. A canoe was then seen approaching from the direction of Poverty Bay. Banks says that it had four people on board, including one whom he well remembered seeing on the rock in the [Turanganui] river. Its occupants did not stop to look at anything, but went at once alongside the ship and, with very little persuasion, stepped on board. Their example was followed by the occupants of the other canoes, seven in all, and containing fifty men.

Gifts were freely made to the visitors, and they quickly parted with almost everything that they had with them, even their clothes, in return for Tahitian cloth. The occupants of one canoe, after selling their paddles, offered to sell their craft.’

This historic incident is the beginning of a crosscultural journey of Māori hoe hopefully to be continued. 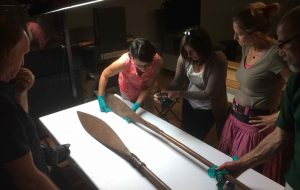 This hīkoi or ‘long journey’, as reflected in this blog, is not a protest march but a walk into a shared Māori-European history. In this particular case it documents peaceful exchange and mutual enrichment, which started on the East Coast of New Zealand back in 1769. It’s a hīkoi of crosscultural exchange which in my perception is continued again today by Pacific Presences project work, by sharing images and stories and perhaps loaning the real paddles for the Cook celebrations in New Zealand in 2019. As Amiria Salmond has recently asserted:

‘Today the paddles are attracting great interest in the Tairawhiti region as taonga (treasured ancestral artefacts) of the local Maori people. Their importance as early examples of kowhaiwhai painting has been recognised by those engaged in the revitalisation of Maori arts, and research is in progress to establish their genealogical connections to present-day Maori communities’. [2]

The various hoe now present in England, Germany and New Zealand are symbols of the very first peaceful encounter of Maori and Endeavour crew. These hoe have inspired the artwork of Steve Gibbs of Ngai Tamanuhiri, a kin-group whose ancestors may have been among those who exchanged the paddles with Cook’s crew[3] and hopefully to be continued at the Cook celebrations in 2019 when these amazing hoe may travel as a loan across the oceans once again to their origin at the East Coast, to be honoured and greeted by the descendants of their makers.

Amiria Salmond and Steve Gibbs were particularly excited about the evident similarities between the red ochre kowhaiwhai paintings on the blade of S 40325 and one particular sketched blade by Parkinson, drawn in water colour on the spot on board the Endeavour in October 1769. 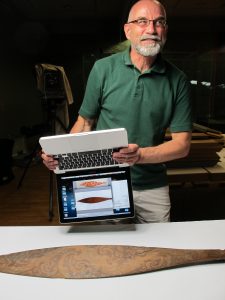 Oceania curator Ulrich Menter from Linden Museum helping us compare the excellently preserved actual blade of S 40325 held in their archives with images on Amiria Salmond’s laptop: Paddle blades from top to bottom on the screen are 1) Parkinson sketch from the Endeavour in 1769 and 2) C 589 held in the Hancock Museum, Newcastle.
(photo courtesy: Billie Lythberg)

Steve Gibbs’ subsequent visit to Newcastle as well as another close look at the images of the Newcastle paddle confirmed, that C 589 held in the Hancock Museum, Newcastle was the one sketched by Parkinson. Yet, the similarities between the Stuttgart and Newcastle paddles are striking and they are clearly from the same incident.[4] 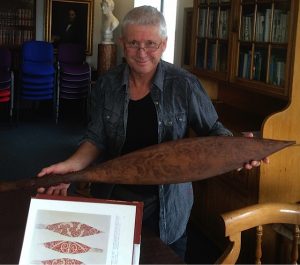 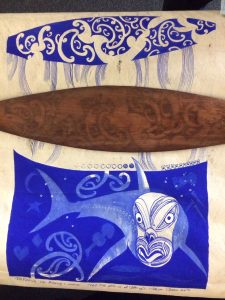 Artwork by Steve Gibbs – titled ‘Takoha’, painted on Tapa. Takoha refers to the custom of gifting and that things will be returned. In the second image he placed the real hoe from the Hancock Museum onto his tapa painting.
(Photo courtesy of Steve Gibbs) 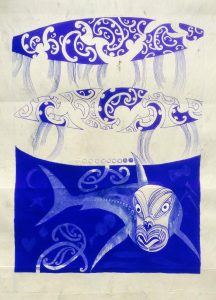 Artwork by Steve Gibbs – titled ‘Takoha’, painted on Tapa. Takoha refers to the custom of gifting and that things will be returned. In the second image he placed the real hoe from the Hancock Museum onto his tapa painting.
(Photo courtesy of Steve Gibbs)

To me personally, these hoe from waka taua of the East Coast of NZ are a symbol of the continuum of fruitful cultural connections into our present time. One of many unique ‘Pacific Presences’ in Europe coming back to life again – in this case by the incredible artwork of Steve Gibbs, his upcoming PhD thesis as well as collaborative writings of Amiria Salmond, Billie Lythberg and Steve Gibbs for the forthcoming Pacific Presences book publication.