Coconut fibre armour and a Porcupine fish helmet from Kiribati

In February and March 2016 conservator Rachel Howie undertook an internship with the project, here she reflects on the work she did:

For two months I had the opportunity to research and conserve some amazing objects from the collection of the Museum of Archaeology and Anthropology (MAA), Cambridge. These included a porcupine fish helmet, and coconut fibre armour consisting of a cuirass, sleeves and overall-style trousers. The aim of the project was to conserve and mount the objects for display in a micro gallery exhibition at MAA in 2017, and for loan to the Royal Academy in 2018. In addition I had to research the materials, manufacture and use of the armour and helmet. This included looking at comparable examples in various UK institutions. In this blog post I will concentrate on the conservation.

The cuirass, sleeves and trousers are all made from coconut fibre with human hair used for the decoration. The armour was generally in a good, stable condition, but covered in a layer of museum dirt. All three pieces were cleaned with brush vacuuming and then with groomstick (natural rubber). A small number of the human hair bindings on the cuirass required stabilisation, this was done using tinted Japanese tissue to secure the binding with a wheat starch paste: 4% methylcellulose 50:50 adhesive. 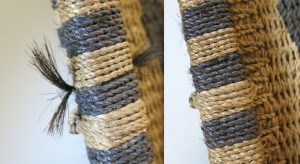 The trousers had a number of holes along the sides and one on the chest. These were secured with dyed nylon netting on the outside and the large hole on the side was also secured on the inside with dyed silk. This prevents the holes from increasing in size and also stops the mannequin from being visible through the hole while on display. Both the sleeves and trousers had deep creases along the edge from being stored flat. These were relaxed using local humidification with damp blotting paper and sympatex (a waterproof, water vapour-permeable membrane). Sympatex membrane brings the applied moisture in gaseous form to the surface of the object without the object actually coming into direct contact with the liquid.

An impressive feature of the Kiribati armour is the helmet made from a hollowed out and dried porcupine fish. The helmet was created by hunting a porcupine fish while it is fully inflated and then burying it in the sand until it is dried out. The head is then removed and the skin is expanded in order to accommodate the head of the wearer. Ear guards were cut from the fish’s body. 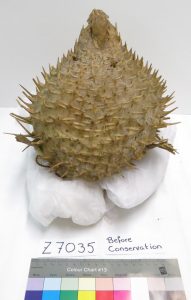 Some helmets are composed of just the dried skin of the fish (like the MAA example), while some examples are reinforced with an internal coconut fibre helmet (see British Museum Oc1904,0621.28) and others are lined with plaited pandanus strips around the edges (see BM Oc1887,0201.54). The are several types of porcupine fish used, our helmet is from the Diodontidae family, most likely the Diodon hystrix as this was commonly used, however this cannot be confirmed for certain. 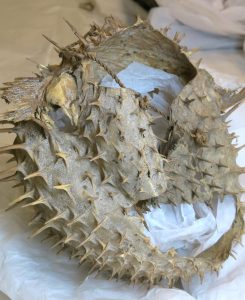 When the helmet arrived at the conservation lab it was unfortunately in a poor state. The ear guards were misshapen and bent inwards into the cavity of the helmet. They were both very dry and rigid, and each one had a tear along the bend. In addition there was also a number of broken barbs. 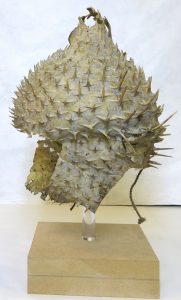 The helmet was surface cleaned using a soft brush and conservation vacuum. This was done with incredible care as the surface of the skin was covered in sand, which could have been due to the manufacturing process, so I wanted to leave this in place. Luckily the sand was attached quite securely to the surface. The broken barbs were repaired using 20% Mowilith 50 (polyvinyl acetate) in 50:50 Industrial Denatured Alcohol: acetone, as this is a strong adhesive and tacky, but allows the retention of flexibility.

The main issue was the misshapen guards. There are a number of ways to reshape materials from localised humidification using sympatex sandwiches, to humidifying the whole object by creating a humidity chamber. As it was only the flaps that required reshaping I decided to use localised humidification using a preservation pencil connected to an ultrasonic humidifier. When this was complete I now had access to the reverse of the tears so was able to stabilise these by attaching a backing of Japanese tissue (Tosa tengujo) with 2% Methylcellulose in deionised water.

Now that the objects have been cleaned and stabilised, they are ready to be mounted for the exhibition. Due to the fragile nature of the materials this will take place next year just before the exhibition opens in April 2017. Thank you to the Pacific Presences team for providing me with the opportunity to research and work on such unusual and interesting objects.